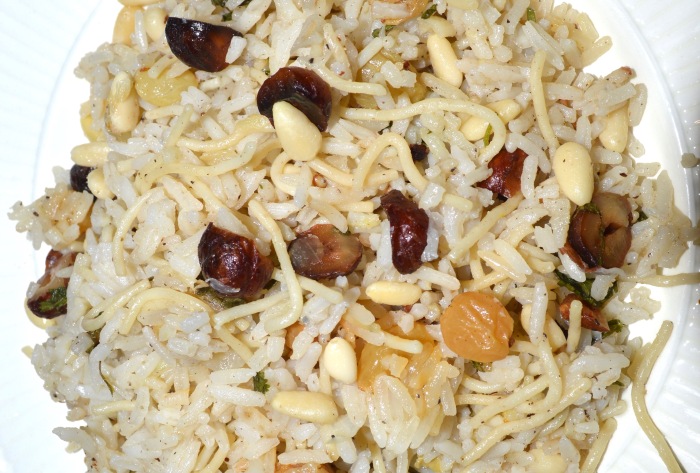 Before we start today, we need to have a talk. I know that some of you are reading these great articles, but you are not actually trying some of the fantastic recipes.  This has got to stop.  Go no further unless you are committed to cooking rather than just reading.  I say this because the recipe that I am going to share with you today is so good that it will bring tears to your eyes.

If you’re Greek, Armenian, Turkish, Iranian, Afghani or Azerbaijani, you already know about this great dish – it is part of your national tradition.  If you’re Brazilian or Spanish, you eat versions like Pilau and Paella.  Most of you have had it in restaurants, but you have probably not paid attention.  This magical dish that we are going to talk about today is Rice Pilaf.  Forget the little boxes that you can buy in the store.  Make Rice Pilaf from scratch at home and it will be like the day you first tried garage door opener, or something.

The word “Pilaf” is a Turkish word and there are varieties of the same word and the same dish throughout Eastern Europe, the Middle East and Central Asia.  Hundreds of millions of people eat Rice Pilaf every day.  In every case, different spices and ingredients are added to the rice and a variety of cooking techniques are used.  It is a dish that lends itself to experimentation and creativity.  Everyone can make their own special recipe and I can tell you from experience that it is a dish that is difficult to screw up.

There is a reason that dishes like Rice Pilaf are so common, especially in countries where meat is not abundant.  There are eight amino acids that comprise a complete protein.  Our most common grains, like rice, have only five or six of the amino acids.  However, things like beans or nuts have the missing elements.  Add them and you have a complete protein as good as any meat.  People came up with things like Rice Pilaf not only because it tastes good, but also because that is what they need nutritionally.

To make Rice Pilaf, you basically sauté and toast the rice with onions.  You then can then add several other ingredients including nuts, pasta, lentils, carrots, peas, peppers or whatever else catches your fancy.  Instead of water, you use meat or vegetable broth.  A variety of spices are also added.  You can add raisins or courants for a little sweetness if you wish.  There are thousands of recipes for rice pilaf.

There are many varieties of rice, so it is easy to get confused.  Here’s what you need to know:

-Long grain:  The most popular variety, these tend to be fluffy and not sticky.  The length is three times the width.  In addition to the ubiquitous long-grain white or brown rice, there are other varieties like basmati (Indian), Jasmine (Thai)

-Short grain:  These tend to be sticky.  Sushi rice and Arborio (to make risotto) are common varieties

-Brown rice vs. White Rice:  The brown variety has slightly more fiber and “micronutrients”.  In terms of protein and overall nutritional value, they are very close.  Choose what tastes best.

One of my favorite recipes, which I call “Perfect Rice Pilaf”, is actually a version of an Armenian recipe.  I like it because of the vermicelli and the nuts.  As you review the ingredients and prepare your shopping list – remember that you are really going to make this dish – keep in mind that you can substitute ad nauseum.  For example, instead of pine nuts, use any other nuts you want, including peanuts.  Substitute lentils for the vermicelli.  Lentils work well because they have the same cooking time as rice.  Try parsley instead of cilantro or Turmeric instead of Cumin.  Making Rice Pilaf is an exercise in freedom.

You can experiment as much as you want with pilaf.  Here are a couple of great variations:

Variation #1:  This is a showy version.  Replace the pine nuts with ¾ cup of hazelnuts, coarsely chopped and toasted in a frying pan with 1 tbsp. of butter.   Double the cilantro to 1 cup.  Add the nuts and cilantro at the very end before serving.  You will almost have a salad on top.

Variation #2:  This is a Lebanese twist.  Add ½ cup of lentils, increase Cumin to 2 tsp. and add ½ tsp. of Allspice to the recipe above.  Increase the broth to 2-1/2 cups to provide liquid for the added lentils.  Slice one large onion and sauté in 1 tbsp. of butter until caramelized and blackened – about 20 minutes.  Do this while the rice is simmering.  Serve with onions on top of the pilaf.  Top with a dollop of yogurt and chopped fresh mint.

Pilaf is often served as a side dish even though the three recipes above have enough pizazz to make them the centerpiece if necessary.  If you want to make a meal with Pilaf itself, you can add some side accompaniments to it such as sautéed or roasted vegetables. Cauliflower and mushrooms are some of my favorites.

Azerbaijani plov with qazmaq (the same as Persian tahdig), served with choban salad

Uzbek plov being prepared in a kazan in a Tashkent home